I love the opportunities working with such a talented group of designers who are so passionate about designing for K-12 Schools, Higher Education, and Athletics + Community spaces.  Working at VMDO has also given me the opportunity to become a fully certified FAA UAS drone pilot for aerial videography as well. Below are just a few of the stories that I’m proud to showcase while working for VMDO since 2018.  See more at VMDO.com.

In 2019, I produced, filmed, and edited a series of high energy promotional videos about the exciting studios for the School of Architecture at UVA.

At Thriving Cities, we often pushed the envelope of storytelling and data communication with many digital video products and multimedia prototypes. Below are a few selected examples:

This case study was part of TC’s “New-Paradigm Enterprise” case study series in 2017.  My focus was on a  DIGIAL ‘STORY MAP’ ABOUT CROSSTOWN CONCOURSE (CXC) in Memphis — a 1.5 million sq. ft. vacant Sears Building undergoing a radical historic renovation with social justice and creative placemaking at its core.  This “Story Map” multimedia case study (built on ArcGIS’ Platform) features 11 videos, interactive animations, maps, and text.  (Production Note: I produced and filmed all footage, including 18 interviews with stakeholders and city leaders like Mayor Strickland. I researched, wrote, scripted, and supervised all the content, and hired a part-time animator for motion graphics and editing support.)

I’ve linked to a few selected video/slides from this Crosstown Story Map:

Below is the conclusion video of CXC Story Map – A Bright Spot for a Thriving City.

I also filmed, wrote, and directed the main Case Study video for this project: 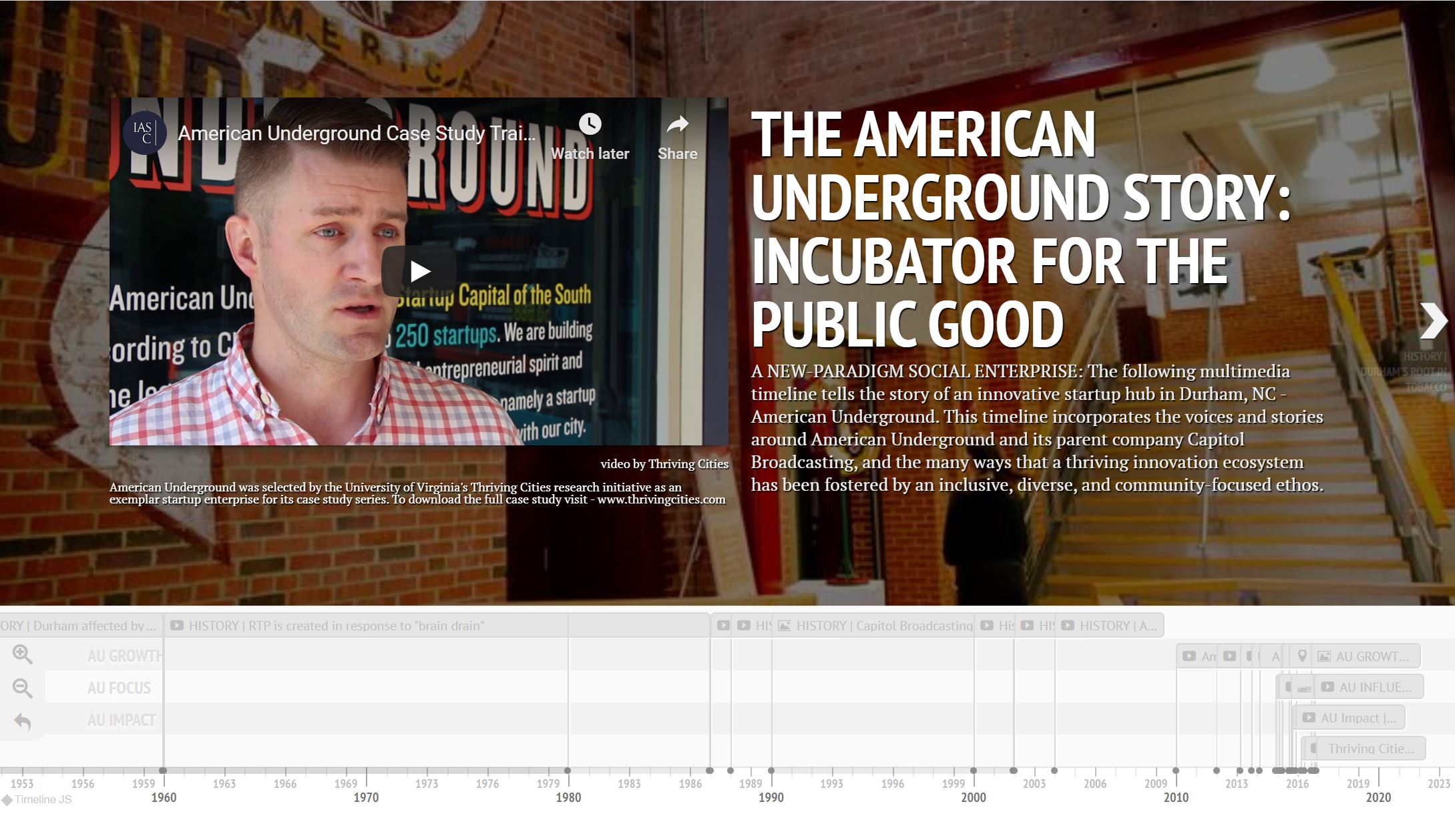 This case study featured an EXPERIMENTAL DIGITAL TIMELINE with 20 video elements and text in chronological order that tells the story of an innovative and community-minded tech hub, American Underground (AU) in Durham.  This  AU TIMELINE  (a Knightlabs Platform) is one of three components of the overall Case Study project.   It features numerous filmed interviews with start-up founders, local leaders like Mayor Bell, and features how Chief Strategist Adam Klein, his staff, and the Goodman Family made this “New-Paradigm Social Enterprise” come to life.   (I produced and filmed all footage, including 16 interviews with stakeholders and city leaders. I researched, wrote, scripted, and supervised all the content, designed most visuals, and hired a part-time animator for motion graphics and editing support.)

Above:  AU Case Study Trailer/Preview Video.This video served as a “preview/sizzler” for the whole project and was key for this and other customer relationships.  AU’s owners and chief strategist used this video content often for their own branding and storytelling, including as a link in their own email signature.  It also led to the commissioning of a large internal Mural which can be found on my Design page.

Additionally, American Underground used this video as an Augmented Reality (AR) display video — they printed postcards with an image that when viewed in their new AR app, showed our Thriving Cities Case Study video.

In partnership with Piedmont Housing Alliance, Friendship Court Housing, UVA, and Thriving Cities, I filmed and edited this video for a grant application.